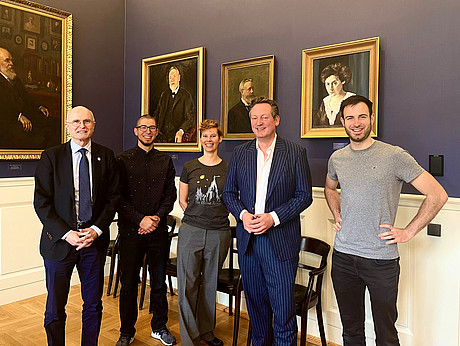 Last Friday, 29 April, we were honoured to be able to welcome Prof. Eckart von Hirschhausen as a guest at no fewer than three events at Charité.

Two current colleagues (Benjamin Kaß, research associate and doctoral candidate at the Institute of Social Medicine, Epidemiology and Health Economics, and Marc-Julien Brüggemann from the Teaching and Learning department at the Learning Center) won the Charité Alumni competition with their respective proposals and their prize was a personal meet & greet with the media star. They met with the Dean, Prof. Axel Pries, at 09:30 in the boardroom of the venerable Friedrich Althoff Building.

Accompanied by several members of the Charité Board, the group then headed to the Wilhelm Waldeyer Building (Institute of Anatomy). From 10:30 onwards, there was an official celebration of the awarding of honorary membership of Charité to Prof. von Hirschhausen – something that was not permitted two years previously, when the presentation was held on 9 June 2020 on a very small scale in line with COVID-19 restrictions. Prof. von Hirschhausen was awarded honorary membership of Charité „for his special services to scientific communication and his social engagement“.

Opening the event, Prof. Heyo K. Kroemer, Chair of the Board of Directors, said: „We are all familiar with Eckart von Hirschhausen from his many stage shows! Time and again, he manages to present medical content – which tends to be fairly serious and very difficult for those affected to process – in a way that is both humorous and engaging. I believe that, by doing so, he has made a significant contribution, including from a patient's perspective. Even though we are aware that his current primary engagement is sustainability and we are frequently faced with this here at Charité.“

The Chair was followed by Prof. Martin E. Kreis, Chief Medical Officer, who spoke about the significance of the work of Prof. Eckart von Hirschhausen, reminiscing about his time as a fresh associate lecturer in Munich and the importance of humour in teaching, even back then. „Taking content that is important and serious, and communicating it in a way that ensures it is also understood by the people being addressed; I believe that is something that Eckart von Hirschhausen has mastered and does on a daily basis in a pleasant and friendly manner.“.

Prof. von Hirschhausen took the audience through his interactive presentation on the serious topic of „Healthy planet – healthy people – medicine during the climate crisis“ and did so with charm and humour. The event was also an opportunity for two student representatives from Health for Future to speak, along with Jannis Michael, responsible for sustainability management at Charité. Each speaker described how their subject is approached by the area in question.

The certificate and the solid silver medal of merit were presented by the Dean, Prof. Axel Pries, who happily linked back to one of Prof. von Hirschhausen's initial statements. Click on the following link to find out for yourself which one it was: https://youtu.be/spgi2aAeklA . At the end of the event, Prof. von Hirschhausen spoke movingly to express his thanks for the award.

So far, honorary membership has been awarded four times by Charité. The ultimate honour from the Universitätsmedizin Berlin hospital is presented by the Charité Board of Directors to people who have performed extraordinary services that benefit Charité.

To close the event, the media star signed his latest book „Mensch, Erde! Wir könnten es so schön haben“(People, planet! Things could be so wonderful) in front of the Wilhelm Waldeyer Building. Charité students from the Health for Future initiative also gave their support to the topic: The alliance of people from the German-speaking healthcare field is committed to climate protection. An important message that we have received loud and clear!

A big thank you – including on behalf of the Board of Directors – goes to our dedicated management trainees, colleagues from CFM and the wonderful team at BeST, who put all their energies into organising and running the event!

No results? Please also use our central search.