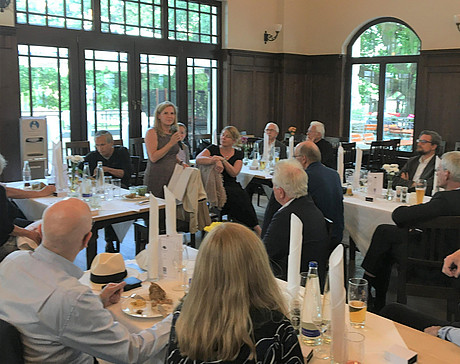 Dinner to honour our former (and currently still active) professorsn

The last farewell to Charité professors was held in March 2017. On 7 June, we were finally able to celebrate W2 and W3 professors who had left the Universitätsmedizin Berlin hospital at an event held in a new, COVID-compliant space.

At the request of the Charité Board of Directors, invitations were sent to selected academic officials who had left since 2017 (no longer employed by Charité). The relaxed dinner with members of the Board was an extremely enjoyable event that generated plenty of positive feedback. As well as the country-style atmosphere of the Zollpackhof restaurant, the barbecue on the terrace that was cooked live for us was particularly popular.

Being able to get together in person strengthened links to Charité; furthermore, Board members were keen for those that had left to receive clear communication about and be involved in important issues like the strategy and development of the Universitätsmedizin Berlin hospital. The professors – who had left Charité for a variety of reasons – were awarded Charité's silver merit pin by Board members as a token of appreciation in recognition of their services.

Prof. Sandra Junglen, newly appointed at the Universitätsmedizin Berlin hospital, gave substantive input about current developments in her research area in the context of the ecology and evolution of arthropod-associated viruses.

The sense of team spirit among those who were invited was impressive. Ms Lurati suggested an introduction round to break the ice and this produced numerous points of reference for the conversations that followed. The evening was a clear success and metaphorically brought everyone present closer together – subject to pandemic regulations, naturally. Whatever the reference points, from senior professors to mentors for Charité alumni, most attendees still remain loyal to the Universitätsmedizin Berlin hospital, in one context or another. Thank you to everyone who came and made the evening so successful!