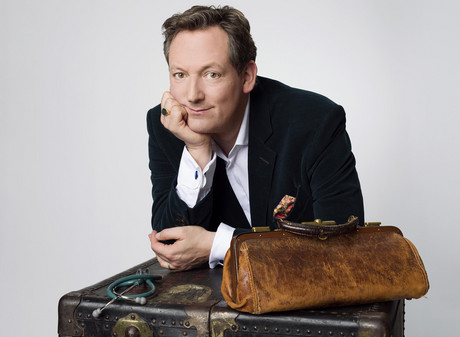 Dean of Charité, Prof. Axel Radlach Pries (who has been responsible for the Fundraising and Alumni department since February), and his Personal Assistant, Tine Hassert (who also took on responsibilities for the Charity alumni area at that point), awarded honorary membership of Charité Alumni to Prof. Eckart von Hirschhausen on 9 June.

He was recognised specifically not only for his activities at and on behalf of the Universitätsmedizin Berlin hospital, but also for his special services to scientific communication and his social engagement.

As a newly qualified doctor, Prof. von Hirschhausen worked in the clinics for paediatric and adolescent medicine at Charité before studying scientific journalism. He has maintained his links to Charité over the years: whether making documentaries aired on German TV channel "Das Erste" to raise awareness of the services and challenges involved in neonatal medicine and care, supporting Charité's Steglitzer Krebsforum cancer forum, hosting specialist conferences, or acting as an ambassador for the "World Health Summit".  Most recently, he has focused on the link between health and climate change, establishing the "Gesunde Erde – Gesunde Menschen" ("Healthy Planet – Healthy People") foundation, giving lectures throughout the academic year, and working with students, doctors and nurses at the University Hospital to organise the "Health for Future" action platform on 20 September 2019.

During the ceremony, the latest honorary member of Charité said: "I am deeply honoured to receive this award. At a time where we are facing global health risks like the climate crisis and new infectious diseases, communication and the ability to share scientific knowledge in politics and in society in a way that people can understand are more important than ever. I have spent the last 20 years working at this point of intersection and I am delighted not only with this recognition of my work, but also that I will now have the opportunity to work even more closely with this excellent faculty."

We are thrilled to welcome him as an honorary member of Charité Alumni!