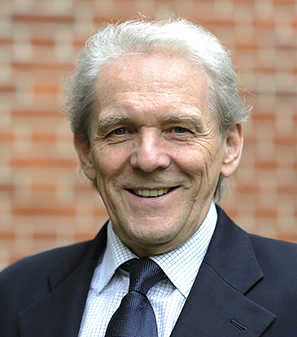 Speaking at the ceremony to present his certificate naming him as an honorary member of Charité Alumni, Prof. Einhäupl said: "After spending more than 27 years at Charité, you can't simply break all ties with your many companions and walk away. It therefore gives me great pleasure, as well as my many personal contacts at Charité, to be able to maintain my links to Charité and my former colleagues as an honorary member of Charité Alumni."

Prof. Karl Max Einhäupl was born on 11 January 1947 and attended the Luitpold Oberrealschule in Munich. He studied medicine at LMU Munich from 1968 to 1974, passing the German State Medical Board Examination in 1974.

From 1974 to 1975, he was an intern in the Department of Gynaecology, Outpatient Department of Internal Medicine and Department of Surgery. In 1975, he passed the American State Medical Board Examination and took over as Head of General Medical Practice until 1977.

In 1977, he returned to LMU Munich and started work in the Department of Neurology at the Großhadern Medical Centre. In 1986, he qualified as a professor in neurology and in 1988, he was appointed as Professor of Neurological Intensive Care Medicine at LMU Munich.

Einhäupl joined Charité in Berlin in 1992. He was appointed Professor of Neurology at the Humboldt-Universität zu Berlin and was Director of the Department of Neurology from 1993 to 2008. From September 2008 to September 2019, he was Chair of the Board of Directors of Charité - Universitätsmedizin Berlin. During this period, Charité became one of the largest and leading university hospitals in Europe.

From 2001 to 2006, Einhäupl was Chair of the Scientific Council. In 2004, he was awarded the German Federal Cross of Merit. From 2003 to 2009, he was a member of the Health Research Council at the German Federal Ministry of Education and Research and he has been a member of the Board of Trustees at the Otto von Guericke University Magdeburg since 2007. From 2007 to 2015, he was Chair of the Board of Trustees at the Technical University of Munich.

To mark the farewell to Prof. Einhäupl, Michael Müller, the Governing Mayor of Berlin, acknowledged his 11 successful years at the helm of the Universitätsmedizin Berlin hospital, saying: "Prof. Einhäupl has done an excellent job of developing Charité and its campuses across the board into the superb centre for research, teaching and healthcare that it is today. One of his biggest achievements is the economic consolidation of Charité. Above all, however, he has made a significant contribution to raising the international profile of the Universitätsmedizin Berlin hospital and to helping to launch successful collaborations such as the Berlin Institute of Health, the Berlin University Alliance and Oxford. His personal commitment to the modernisation of the Bettenhaus building – the biggest construction project for Charité in recent decades – was also a remarkable achievement. He deserves our thanks for all his work and I wish him the very best for the future!"

We are very proud to welcome Prof. Einhäupl as an honorary member of Charité Alumni. He is a figurehead for the Universitätsmedizin Berlin hospital and a true representative of our alumni organisation. We look forward to working with him on projects including the GeDenkOrt.Charité initiative – his experience, his interest in medical history and his discretion mean he has much to contribute.